Romeo is a village in Macomb County in the U.S. state of Michigan. The population was 3,596 at the 2010 census. The village is situated at the southeast corner of Bruce Township, with a portion extending south into Washington Township. Armada Township is adjacent to the east and Ray Township to the southeast.

Romeo is known for its Peach Festival, which takes place every year during Labor Day weekend. This event dates back to 1931 and includes a car show, floral parade, craft show, and many other events.

On February 14 of each year, the village of Romeo offers a special dual postmark with the community of Juliette, Georgia. This tradition began in 1994, as a nod to the William Shakespeare play, Romeo and Juliet.

A settlement here was originally occupied by the indigenous Chippewa (Ojibwe), an Algonquian-speaking people who were part of a large language family of tribes extending to the Atlantic Coast. Those tribes around the Great Lakes are thought to have migrated to this area by the 12th century.

The early European-American settlers in this area referred to the Chippewa settlement as Indian Village. In the 1820s and 1830s more migrant European-American families began to settle in the area, building homes and establishing businesses. They renamed the community as Hoxie's Settlement, named after a man who opened an inn on main street. In 1839, Hoxie's Settlement became incorporated and was renamed as the village of Romeo.[4] The name was suggested by the wife of local merchant Nathaniel Taylor because it was "short, musical, classical and uncommon."  Romeo celebrated its 175th anniversary as of March 9, 2013. 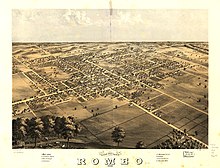 Romeo once served as a trading center for the timber industry, and had many mills processing lumber from the region. Many wealthy timber families resided there. Dozens of stately Victorian mansions survive. Romeo is distinct in the area for having a fairly robust, traditional downtown, which has never suffered a major fire. Because of this, some stores and restaurants downtown have features such as original tin ceilings from the Civil War. In the early 20th century, Romeo was the site of an early business devoted to the new automobile industry: the Detroit Auto Vehicle Company operated here from 1904 until 1908.

According to the United States Census Bureau, the village has a total area of 2.02 square miles (5.23 km2), all land.

Romeo plays host to the annual Michigan Lavender Festival every summer, at the height of lavender season.[9] Romeo also hosts a Michigan Peach Festival annually on Labor Day weekend. Started in 1931 to promote the local orchards, in the early 21st century, festival events include a 5K/10K run, a car show, three parades, craft show, Kidsfest, and carnival rides. A yearly Peach Queen is chosen to preside over events and represent Romeo. The Michigan Peach Festival is sponsored by the Romeo Lions Club fraternal organization.[10]

Included below are homes for sale and real estate in Romeo, MI.

If you would like more information on any of these Romeo real estate listings, just click on a property to access the full details. From there, you can request more information or schedule a tour. And we'd be happy to provide you with disclosures, past sales history, dates and prices of properties which have recently sold nearby, and more, so just let us know how we can help!

And, for your convenience, feel free to register for a free account to receive email alerts whenever new Romeo listings come on the market that match your specific criteria.